How we prepared Tidal Tools to run on M1 (Apple Silicon) 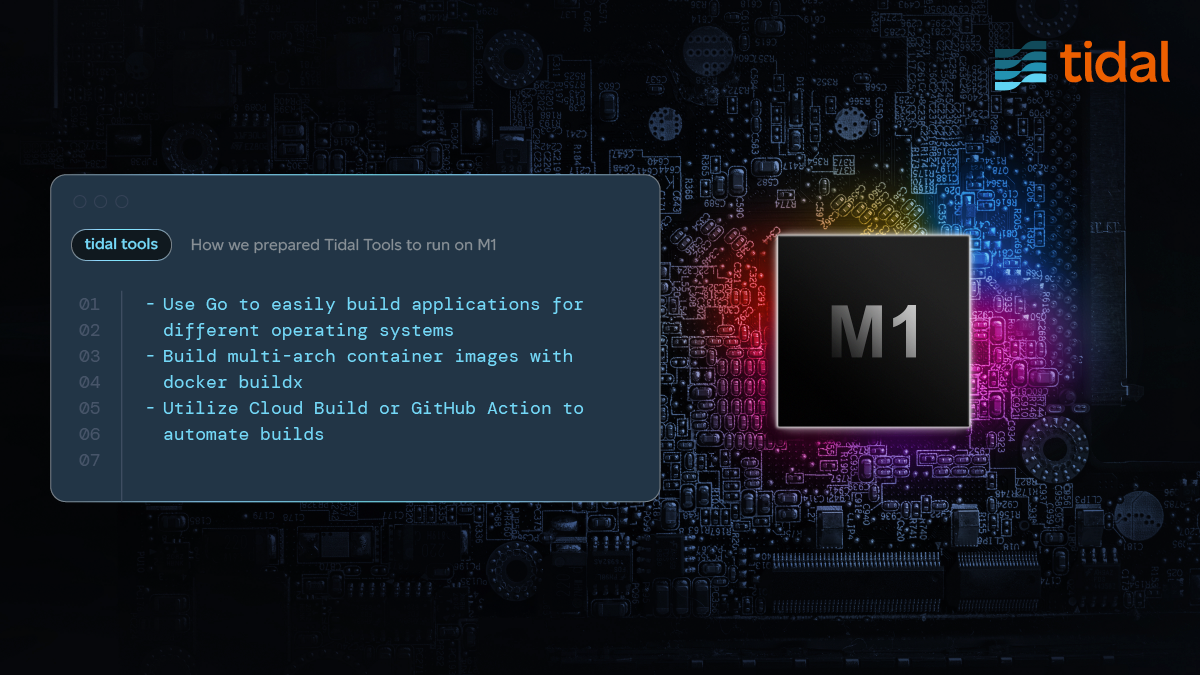 How we prepared Tidal Tools to run on M1 (Apple Silicon)

The release of Apple M1 chip (also known as Apple Silicon) in November, 2020 was one of the significant events in computer industry for the past few years. It boasted the improved performance and the top-notch efficiency, so there was no surprise that a lot of power users would switch to that new architecture as soon as possible.

While everything was fantastic in terms of new Apple hardware, there were numerous complaints that some software stopped working or worked buggy on the newest Mac computers with M1 chip. Software vendors just hadn’t been ready to quickly update their applications and libraries for Apple Silicon.

We, at Tidal, were eager to release our CLI application — Tidal Tools — for the newest chip from Cupertino. But since we rely on a lot of third-party technologies the update process wasn’t smooth. However, we managed to complete it successfully. This long post describes our journey.

How to cross-compile Go app for Apple Silicon (M1)

At Tidal we build our CLI application — Tidal Tools — to make it easier for our customers to deal with all sorts of data necessary for their cloud migrations journey. The CLI app could be run anywhere — on a manager’s Microsoft Windows workstation, on a developer’s Apple MacBook Pro, or even on a Linux server since a long time ago in a datacenter far, far away… Because of this, having the ability to build the app for different operating systems was the top priority for us since the beginning of the development. That’s why we choose Go programming language for our CLI application development.

Go (sometimes referred as Golang) is a statically typed, compiled programming language designed at Google. Among other awesome features of Go, there is one which was crucial for us — the ability to cross-compile code for different operating systems and architectures. In other words, it is possible for a developer running, for example, macOS on her laptop to build an application suitable for running on Windows or Linux, or any other operating system which is supported by the Go compiler.

The following short walkthrough will guide you through the process of creating a simple Hello world application and building it for Linux, Windows and macOS on M1.

Let’s start with writing the actual code for our application:

If we build it (with go build hello.go command) and run the binary (./hello) it should display something like the following:

If we run ls, we’d see that a new file (hello.exe) appeared in the current directory:

Now, let’s build our application for some old (32-bit) Linux:

And it should be of 32-bit executable type:

And finally, let’s build the same application for Apple Silicon:

Running that go build command should create the third binary in our folder:

The type of the file is the following:

With this simple trick you can build Go applications for different operating systems and architectures on your laptop or a single build server.

Multi-CPU architecture container images. How to build and push them on Docker Hub (or any other registry)

In the previous section we were talking about Go programming language and its ability to easily cross-compile applications for different operating systems and CPU architectures using just a developer’s laptop.

With this post, I’m going to describe some other aspects of modern cross-platform applications development.

It’s worth repeating that at Tidal we build our CLI application — Tidal Tools — to make it easier for our customers to deal with all sorts of data necessary on their way towards the clouds. Tidal’ May 2021 Newsletter describes Tidal Tools as the

meat-and-potatoes of how you’ll start your cloud journey.

The CLI app could be run anywhere:

Or preinstalled on a free cloud VM in:

Tidal Tools is a Go command-line interface (CLI) application. It mostly acts as a Tidal API client accompanying our web application. It also has some additional features like source code and database analysis.

Those two extra functionalities are implemented by our technological partners in other programming languages.

We build Docker container images for such 3rd-party solutions and our application (Tidal Tools) runs containers under the hood using the awesome Docker Go SDK.

When running an image with multi-architecture support, docker automatically selects the image variant that matches your OS and architecture.

So, without further delay, let’s jump straight to the topic!

How to build multi-arch container images with docker buildx

CAUTION! To build container images with multi-CPU architecture support, you need to use parent image which supports multiple CPU architectures. Most of the official images on Docker Hub provide a variety of architectures. For example, the openjdk image variants (which we’re going to use later) support arm64v8 and amd64.

For this example, we’re going to use “Hello world” application written in Java:

Let’s start with a Dockerfile:

To make it possible to build multi-CPU architecture container images we need to install Docker Buildx. Docker Buildx is a CLI plugin that extends the docker command with some additional features, and multi-arch builds is one of those. If you’re using recent Docker Desktop or Docker for Linux packages chances are high that Buildx is already available for you. If not, check the installation instructions.

Create and switch to using a new builder which gives access to the new multi-architecture features:

Running the above commands would build and push multi-arch container images to your Docker Hub profile:

When running such image with multi-architecture support, docker automatically selects the image variant that matches the running OS and architecture.

With this simple trick you can build Docker container images for different operating systems and architectures and host such images on Docker Hub.

In the previous section we were talking about building multiple CPU architecture container images.

This section will guide you through how to implement a pipeline for building multi-architecture container images using Google Cloud Platform’s Cloud Build or GitHub Actions.

As you already know, to build multi-arch container images we need to setup virtual environment and run docker buildx.

Let’s configure such build pipelines for some popular CI/CD solutions.

Cloud Build is a service that executes your builds on Google Cloud Platform’s infrastructure.

The above configuration creates the pipeline to set up the build environment (initialize-qemu, create-builder, select-builder, and show-target-build-platforms steps), to build a multi-arch container image and to push it to the Container Registry on Google Cloud Platform (build-multi-architecture-container-image step).

Please consult the Cloud Build documentation to get the information on how to trigger builds (manually or automatically).

If you prefer to use GitHub Actions instead of Cloud Build, it is also possible.

The pipeline configuration to build multi-arch container images is the following:

To make it work you need to set up some secrets on GitHub:

To sum up let’s repeat the key points on how to prepare an application for M1 (Apple Silicon):